J and I often visit this pretty lake in northwestern New Jersey. A city kid, he spent weekends and summers turning the yard into a sporting field and swimming toward the buoy and then the buoy a little farther out. Now we bring S, and each time we turn onto the road that rises and falls along the lake’s craggy western shore, we wonder whether our 19-month-old recognizes the Swiss-cottage homes and smell of mud and wood stoves.

Last weekend we retreated to the lake. We spent the first day soaking up two inches of water that had sprayed from a burst pipe, and cleaning furnace filters, and mopping puddles from under the leaking skylight. But we still welcomed the magic of being somewhere-else, somewhere very small and cross-beamed inside but overlooking an expanse that lets a spirit roll away should it need to.

After dinner, we decided to build a fire. That’s what you do on a cold January weekend at the lake after wringing frigid water from rugs. J opened the damper and warmed the flue and placed a few logs on the grate and lit a fire starter and waited. The fire starter glowed but the logs failed to catch.

J pulled S into his lap for songs, and I pulled the screen back and sat cross-legged on the hearth.

Until now, well into my 30s, I’ve never built a fire. I know there’s a hard fear, since a fire destroyed a lot of my childhood home. But it’s also true that I haven’t had many opportunities. When fire building is about to happen, someone else always seems to know what to do. I hang back and suppose I’ll learn another time. What else would I do but let them. But last weekend, J and S were singing The Wheels on the Bus and it felt drafty and we were cold from the flood and I wanted a fire. It was one of those moments when you realize you really are the only person who can fill your own need.

“I need some paper.”

“Newspaper is best, but we don’t have any,” said J.

“I’ll use this,” I said, and grabbed the stack of printer paper, until then bound for recycling, that carried my marked-up writing.

I studied the ashes under the grate. I reorganized the logs, creating a small central space. Then I tore a long sheet of story, lit its end, and stuck it into the heart of the log pile. An introduction—a series of stark images—smoked, then flamed. I tore another sheet of story, then another, sticking each into the heart until it blazed. By the time I got to page 5 or 6 of my work, a splinter on one log caught a flame and kept burning. I got really excited and stuck more and more words into the center, then on the sides under jutting log ends, until enough wood was burning I didn’t need to send in more material.

I built a fire. Instinct told me how. It was very, very awesome. 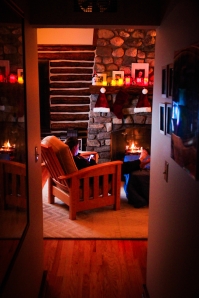 The fire sustained for thirty minutes before I needed to feed another log and a few poem drafts I felt I could give up and let go. We put S to bed. We enjoyed another thirty minutes, then I had no more writing to feed. I let the fire die.

Now I wonder if I could do it again. And I wonder what I’d use for kindling. Most of all, I wonder if some day, S, unbothered by the need to remember fire with a capital f and a cry, will say he remembers these weekends at the lake, the craggy shore road and the smell of mud, and mama making the fire out of so many words.